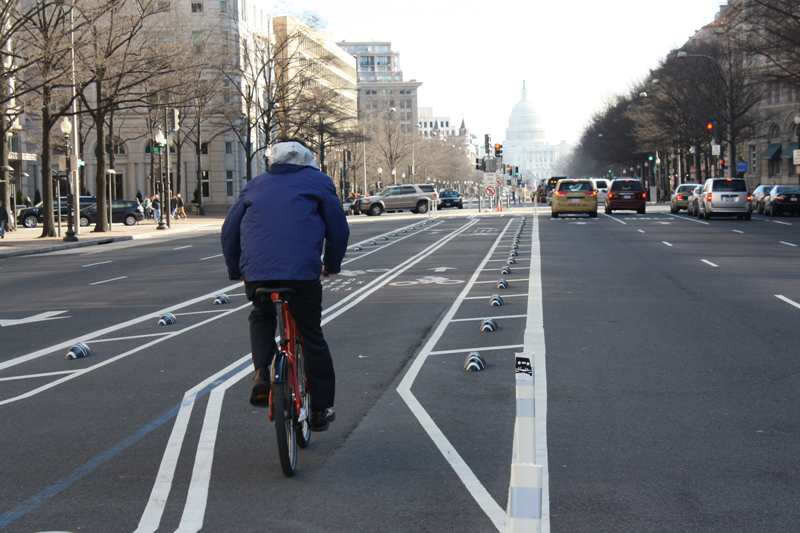 Growing its reputation as a popular method for soft cycle lane segregation in the UK, the Armadillo has made its way across to America, Washington DC in fact to help tackle issues in the Capital which make it incredibly dangerous for cyclists on one particular stretch of road.

The District Department of Transportation (DDOT) drafted the Armadillos in for a trial period on Pennsylvania Avenue with the aim to prevent dangerous and illegal U-turns across cycle lanes place which have become increasingly common despite attempts to increase police enforcement. If they’re successful, the DDOT will place them along the length of the bike lanes, from 13th Street NW to 3rd Street NW.

Meanwhile, a little closer to home the Armadillos have also seen some positive attention through the recent news stories about their success on Royal College Street, Camden. Phil Jones, Camden cabinet member for Sustainability, Transport & Planning says “Latest data from Royal College St cycle lanes shows a massive 111% increase in cyclists since the upgrade and 54% since 2013 – big success”

This is fantastic news highlighting the effectiveness of the Armadillo especially within this very short period. Camden Cyclists said “We urged Camden Council to consider installing one of the internet-linked electronic cycle counters. They agreed on the basis that it will be valuable to have an on-going record of usage as this route is extended and other new routes are linked to it.”
They also said “Motor traffic speeds have decreased.”

Positive remarks from a consultation period in Salford in April 2014 also emphasize that the Armadillo is proving to be a key development in cycle lane safety.

If you would like to find out more about Armadillos, you can do so here